Edgy
The Inventor of edgy Glasses
Alpine Skiing World Championship 1982, Schladming, Austria
Wolfram Ortner
Family and Success
Small and efficient Network
Tin in Schladming
Silver in Marriage
Art & Design
Life as an Inspiration
The Spirit of Perfectionism
Discontent as the Mainspring
Born as a Goldfish
Having good hands for fine things
Food and Drink
A Focus in Life
Acquired and lived Lifestyle
Authentic Design by WOB

Wolfram Ortner was born on the 10th March 1960 in Bad Kleinkirchheim, Austria. His father was a secondary school teacher in Radenthein working as a gym teacher and State Schoolchildren’s Attendant. One of the reasons for the „naturally unavoidable“ growing into the ski-racing sport. Very soon the parallel slalom between school routine and sports career began: „With ten years I joined as the youngest the ÖSV-Schoolboys’ Squad (ÖSV = Austrian Skiing Association) because I had already won at the Schoolchildren’s Skiing Championships. „With eleven years I was already faster than the 14-year olds on state level and with twelve I was double Austrian Schoolchildren’s Champion. In 1974 I passed the admission exam at the skiing high school in Stams/ Tyrol. One year later I was the ‚World’s best Youth Group I Racer in Slalom’ and ranked in the FIS points list under 40 points. In 1976 the call-up into the ÖSV C-Squad followed, in the same year the call-up into the ÖSV B-Squad. On the 17th December 1976 I had my first World Cup appearance in Madonna di Campiglio, Italy and finished as 15th in the fourth starting group. Thereafter as 14th in Laax, Switzerland and third-best Austrian behind Phil Mahre and Christian Neureuther. All of this after a rupture of the collateral ligament in the ankle with operation in September – and hardly with any training.“

The success streak at FIS races continued seamlessly: „After two slalom victories in Bad Kleinkirchheim followed by Andy Wenzel and Paolo de Chiesa and in Pernitz, I finished as European Vice Champion on the 6th March 1977 in slalom and giant slalom at the European Junior Championship in Krajnska Gora, Slovenia. According to the FIS ranking in slalom this meant the 2nd starting group at world cup races. After the victory at the European Cup Race at Jahorina, Bosnia and Herzegovina, and the first rank with the OPA Cup, the prize of the Organisation of Alpine Skiing Associations in Sportgastein, I ended up in place 16 in the FIS ranking list in the skiing season 1977/78 and was in the lead in the European Cup. On the 23rd January Wolfram Ortner is the „Sensation of Kitzbuehel“: rank 5 in the World Cup Slalom and call-up into the World Championship Team for Garmisch, Germany. As the 15th in the FIS ranking list the way up into the national team was due, followed by winning the European Cup slalom in Zakopane, Poland. In 1979 the next highlight was the 4th rank in giant slalom in Jasná in the Lower Tatra, Slovakia.

The continuation of the skiing career, however, left further painful marks behind: 1979 inguinal hernia with operation, 1980 ligament rupture after stumbling and falling over stairs. That year Wolfram Ortner could not run any races – and that also meant: no Olympic Games in Lake Placid! Still, the high-school graduate at that time at the skiing high school Stams remained the no. 1 in the ÖSV slalom team – according to the motto: „injuries gone, struggle back and everything from scratch again!“ The reward: 5th rank in the slalom in St. Anton with bib number 57. And in the first super-g in this new discipline on the 2.6 km long course in La Villa in Hochabtei in the Dolomites, 2nd rank behind Pirmin Zurbriggen. On the 8th January 1982 they said after an herniated disc: support corset during training and at the qualifyings in Schladming for the World Championship in Adelboden, Switzerland at the end of January.

In between“ Wolfram Ortner passed the licence exam for the catering industry (hotel) with distinction before he finished the World Championship with the 2nd rank in the combination slalom and 4th rank in the combination. This race was an incisive experience: „ Chief Coach Karl Kahr knew of my qualities as a downhill skier as well. Just for fun I dared to run the icy Schladming downhill course only on 210 cm giant slalom skis – normally 222 cm skis are used. As a result I was selected for the combination too which had been organised for the first time in Schladming. In the combination slalom I came in second, the combination downhill was a desaster for me. During training I was 2 seconds faster, therefore I ranked fourth in the combination with a minimal lag against the 3rd and 2nd places. Only years later in a sleepless night did I realise why I had messed up the downhill: I had used a Blizzard ski with a Salomon binding like Erwin Resch whose skis I had received from Blizzard for the World Championship downhill. Since I didn’t have any points in downhill I started the race with one of the last bib numbers around 60 and thus maintained in any case the suspense of the contest up to almost the last bib number. After the start s-curve before the first schuss, my boot slipped out of the binding which luckily forced me back into a stable position. This rotating movement however irritated me because I didn’t know whether the binding would keep or not after the high-speed leg entering the next s-curve – running at a speed of 130 km is not a very nice feeling. After I had regained my security I tried to step on the gas and made a serious mistake. I wanted to ride directly on a jump in the Bannwald entry instead of taking a swing at the entry in order to ride and take the jump in the requested direction. Due to this mistake I reached the highest point at this jump anyway and jumped to the right instead of to the left because of the wrong line. After this moment of shock I had to return to the ideal line in a ‚giant slalom’ to the right with a huge swing – and that is where the World Championship Gold Medal fell by the wayside.“

After the World Championship Wolfram Ortner was in good shape but again haunted by bad luck with injuries in March 1982. Knee injury and cartilage damage with operation in Innsbruck as well as meniscal injury at the World Cup Final in Sestriere (Montgenèvre), Italy with operation in Klagenfurt. Despite a lack in training he was still able to hold his ground as 12th in slalom in the World Ranking List in that year as well. But in October 1982 it became obvious that even with the toughest training, an improvement in performance could no longer be expected. And the last attempt with a race without training in Courmayeur, Italy meant the early end of a great ski racer career – and the beginning of a new life in all kinds of sectors. Always innovative and full of ideas, perfectionist and practical.

Wolfram Ortner remembers the first time after his skiing career: „Actually I wanted to become a pilot or sports physician, but the economic problems in the family-owned hotel forced me to take it over in 1983. Thus at the age of 23 I was a hotelier but hadn’t the slightest idea of many things I would have desperately needed. So the first thing I did was to hoof it through Vienna and Munich with my friend Wolfgang Kury and sell from door to door at editorial offices and travel agencies. There was no time for holidays, all our trips went on wineries, restaurants and producers etc. And I learned a lot, just like my whole life was actually one of ‚learning by doing’. But learning also has its limits: I hate poems, I hate quotations and what I don’t like at all are user manuals. Luckily enough, I’m rather quick at understanding coherences. Thus we were the first in our hotel with only 60 beds in the town which offered 5-course dinners at choice and sold about 6,000 bottles of wine per year. I managed to turn a ‚bankrupt company’ into an occupancy rate of 240 days within two years only.“ And then things went stroke upon stroke which is best presented in time lapse.

1983 to 1985 book author with the titles „Wirbelsäulentraining“ („Spinal Training“), „Aufbau- und Heilgymastik“ („Structural and Medical Gymnastics“) and „PR im Fremdenverkehr“ („PR in Tourism“),
1984 Birkenhof Triathlon,
1985 Birkenhof Quattrathlon,
1985 marriage to Barbara and birth of our first son Christian, 1989 birth of our second son Josef Matthias,
1986 foundation of the "Bad Kleinkirchheimer Bridge-Week" and "Birkenhof Bridge-Camp",
1988 Concept "Die Welt im Dorf" and Co-Oorganisation,
1989 beginning of my distiller career,
1989 planting of Austria’s highest located vineyard,
1989 foundation Top 5 Hotels,
1992 construction of a bonded distillery,
1992 foundation of the „Destillata“ – International Trade Fair for Fine Brandies,
1992 foundation of a publishing sector in the company for spirit publications,
1992 WOB-Glasses
1995 sale of the hotel, building of our own home and establishment of the Distillery WOB,
1998 sale of the event „Destillata“,
2000 entry into the internet with the portal www.qios.net,
2000 construction of the barrique cellar and beginning of the professional whisky production,
2000 CAFÉ DÖ WOB,
2000 WOB-Varios Cigar Cutter,
2001 start of the culinary brand „Nock-Land“ and the portal www.nock-land.at,
2001 CIGAR DÖ WOB,
2002 cookbook „Die Kunst des Einbratens“ („The Art of Roasting“),
2002 artistic ambitions in painting,
2004 start of the World Spirits Award & Academy.

Here the moment to catch a breath has probably come as the story continues immediately with pioneer spirit and perfectionism in the creative product development – be it cuisine or cellar, cosmetics or art.

And coming to think about it and recalling the last 20 years I have known Wolfram Ortner, then some of his „inventions“ are still missing. After all, he is also a coffee roaster, glass designer, cigar aficionado and a lot more. But this would be material for a new story – and that’s why I would rather like to ask him for his closing remarks for this one here: „Looking back, I am glad that everything turned out the way it did. Answering the question whether I would have liked to be World Champion in Schladming, I have to say: of course! I would have loved to reap this success for my requirements, my talent, my attitude and my ambition in athletic performance. However, I couldn’t reap these fruits in sports but in business and my private life on account of these ‚virtues’. Should I ever have the possibility of getting a ‚joker’ for my life so far – I wouldn’t need it. I would like all of it to happen again from the very beginning, just the way it was and is...“ But in the world of spirits he is on the winner’s podium of the scene with the World Spirits Award, after the Destillata. 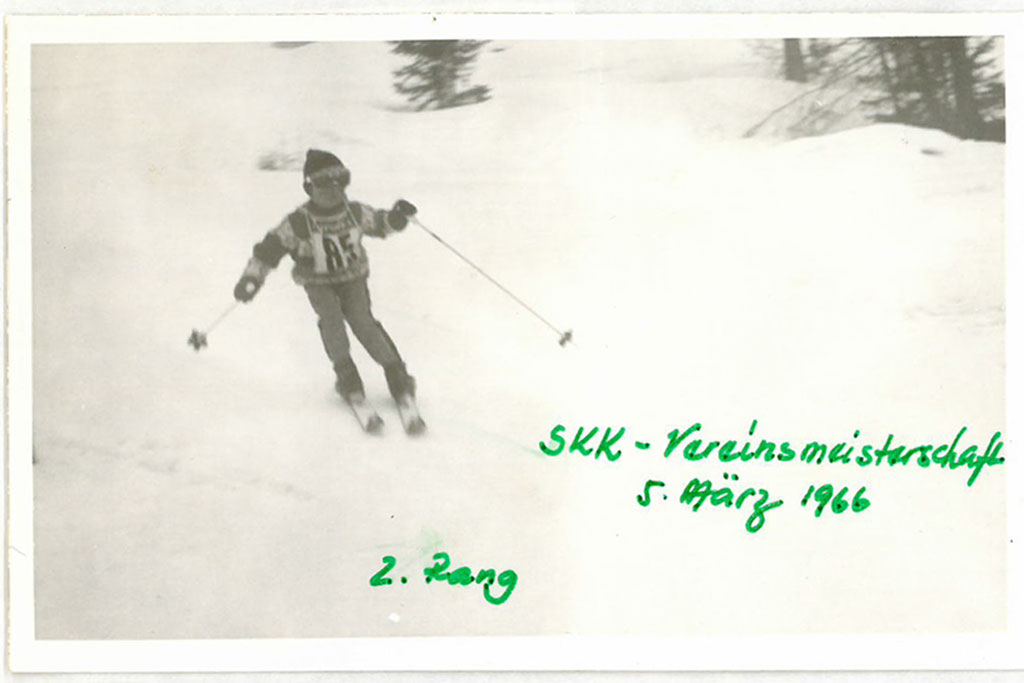 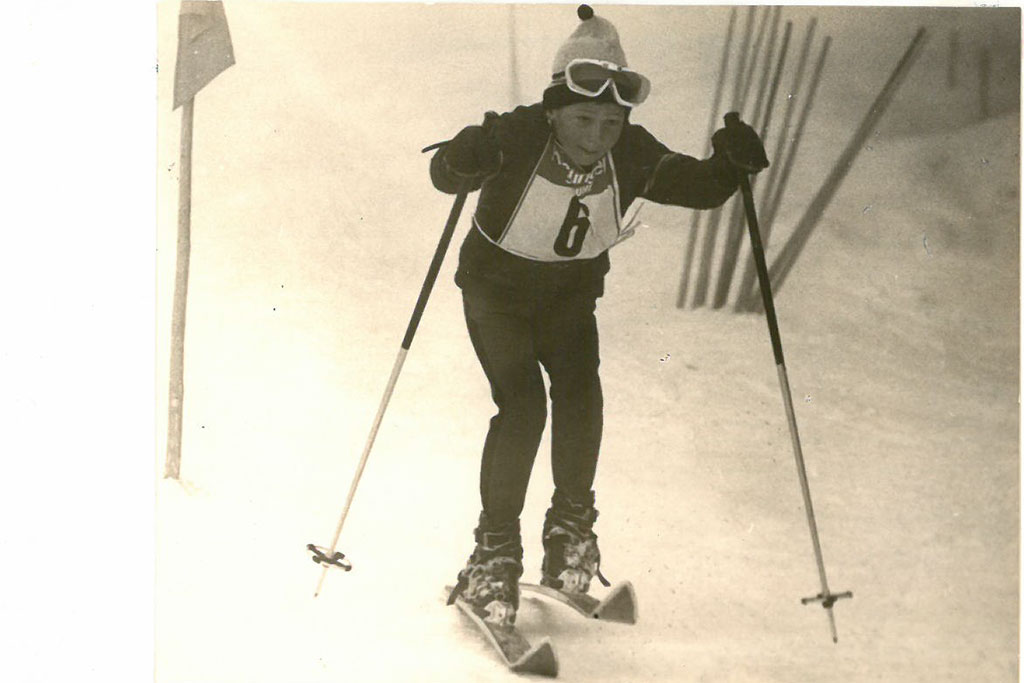 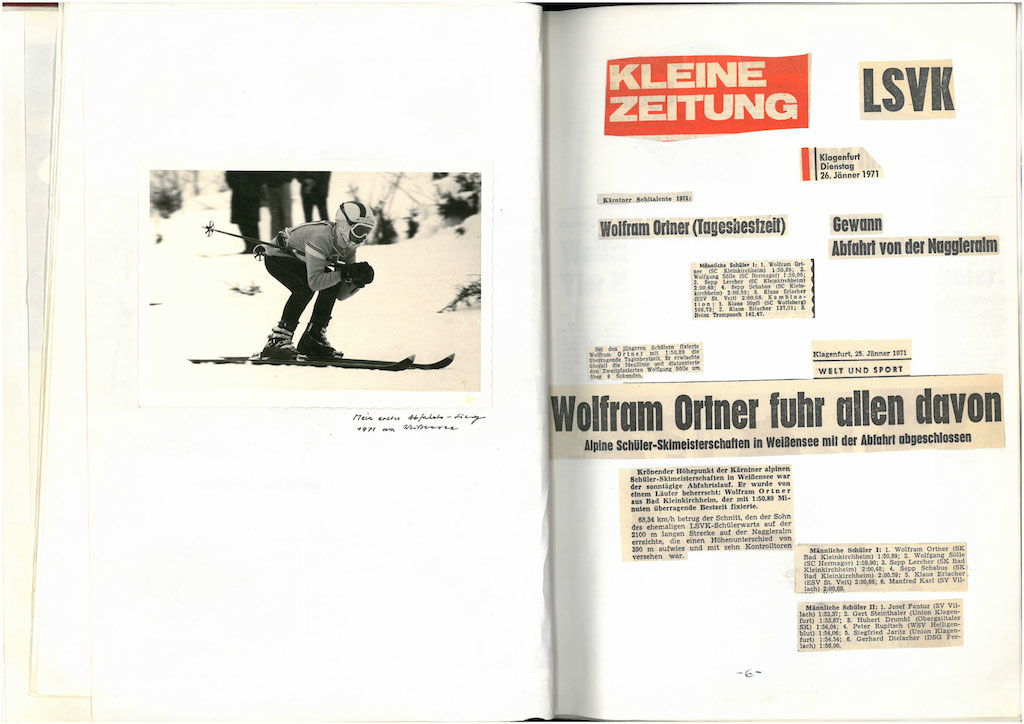 Skiing Albums – Contemporary Witnesses of my Career
All Skiing Winters from 1970 to 1983 –
as Download or to browse as PDF PDF
Affectionately compiled and designed by my Father. newspaper articles about me and my „fellow campaigners“, studies of skiing techniques, personal notes and comments – and of course photos, photos, photos...
Dad, thanks for the great job! 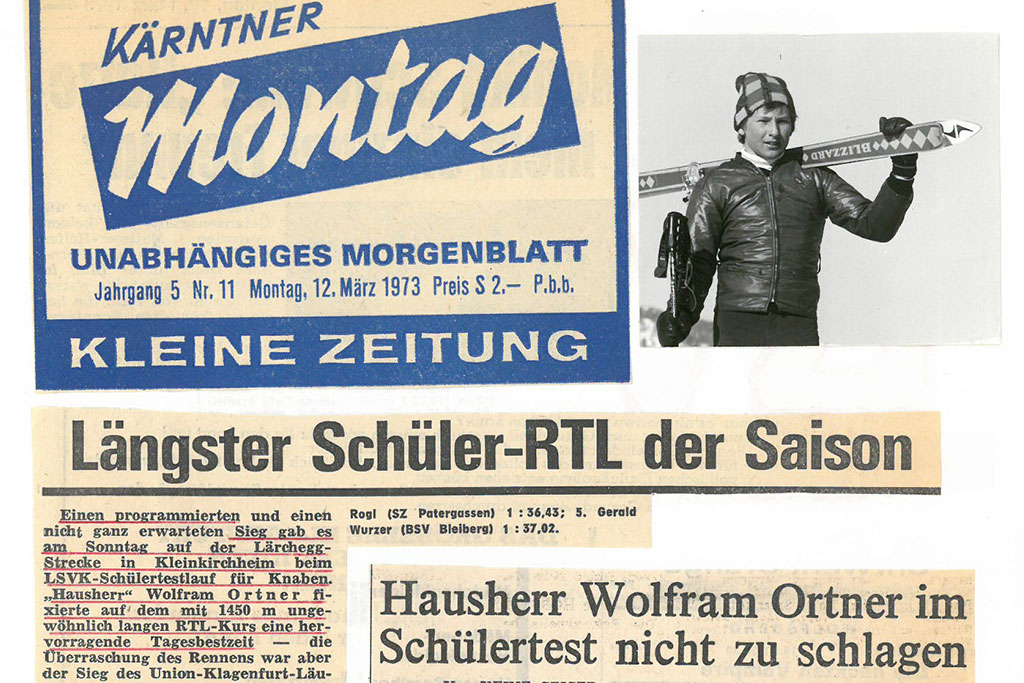 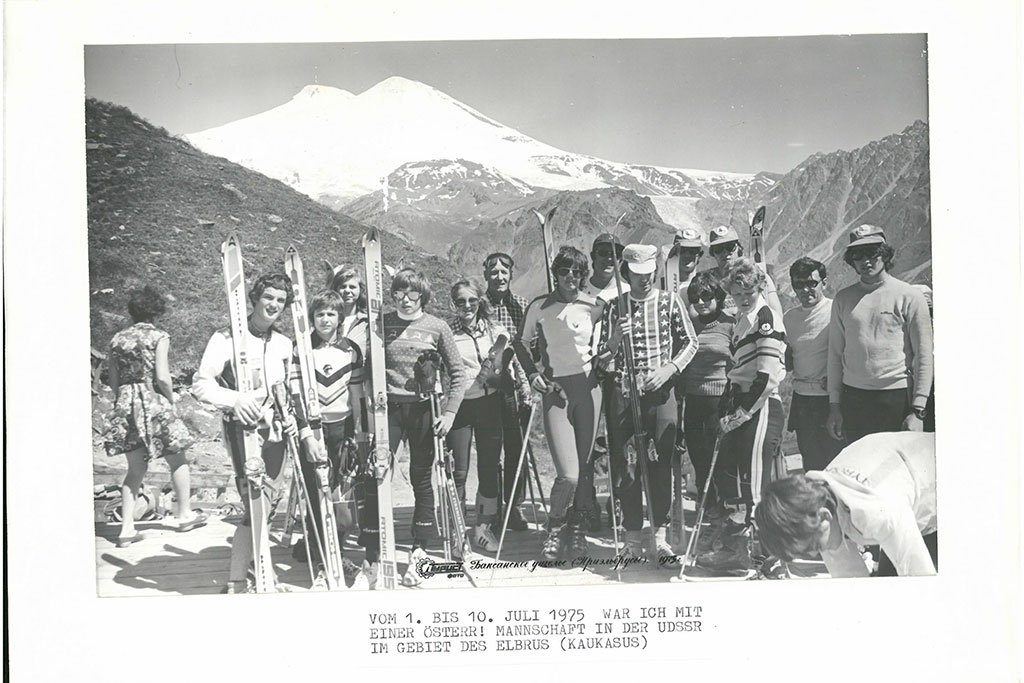 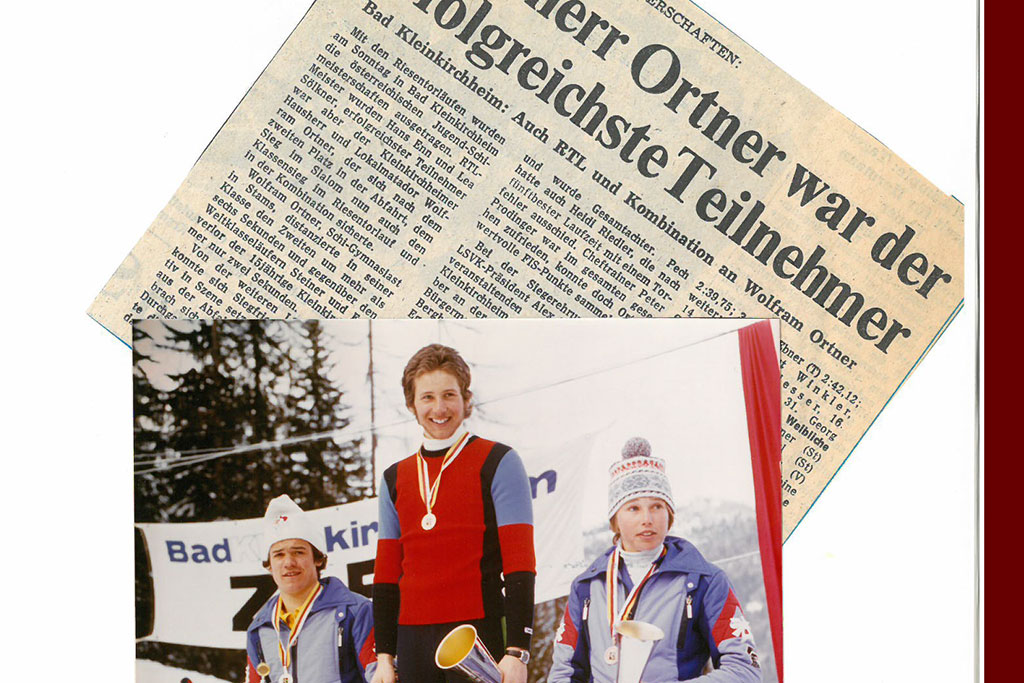 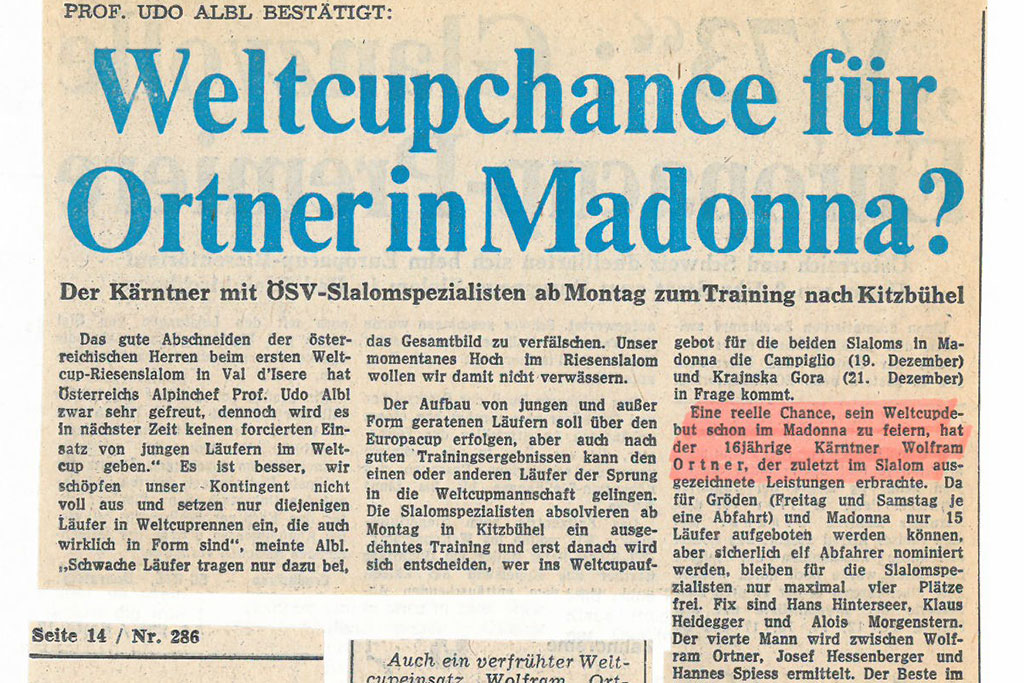 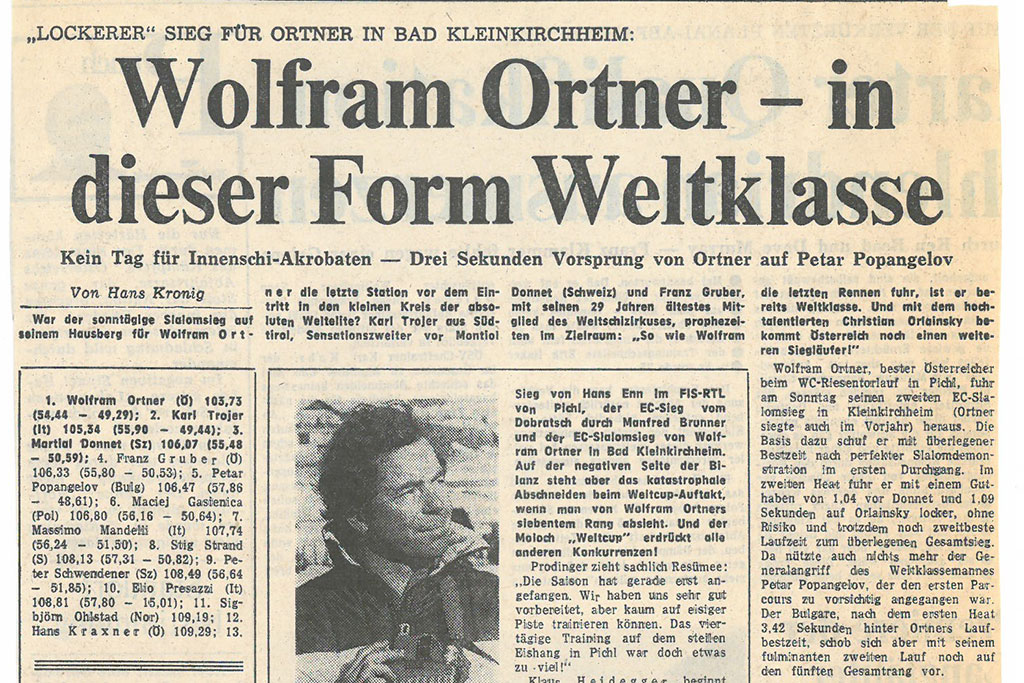 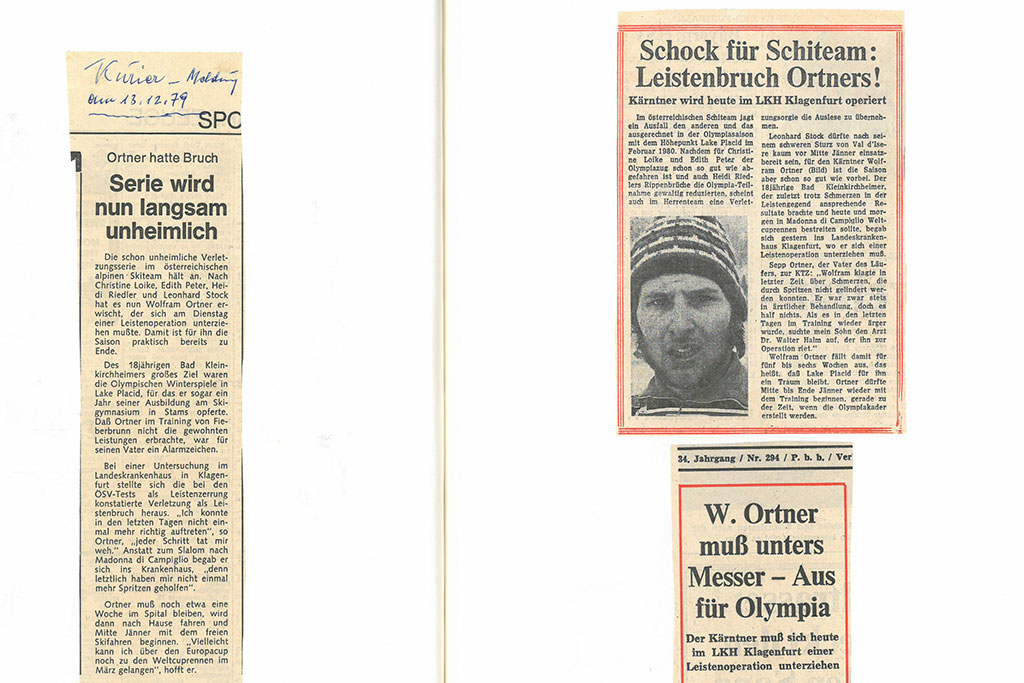 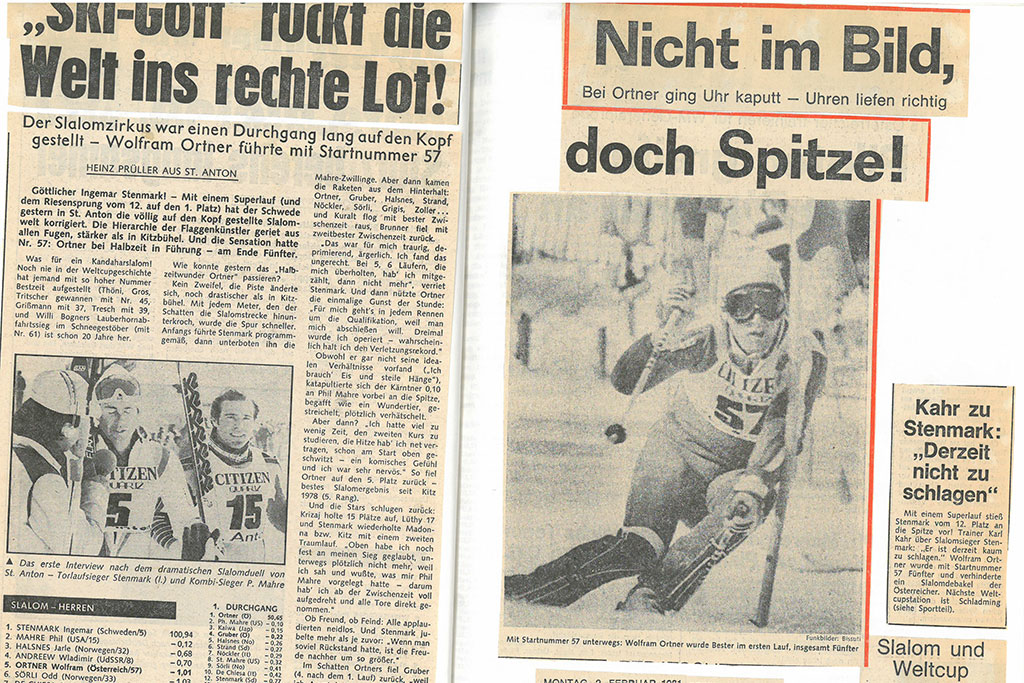 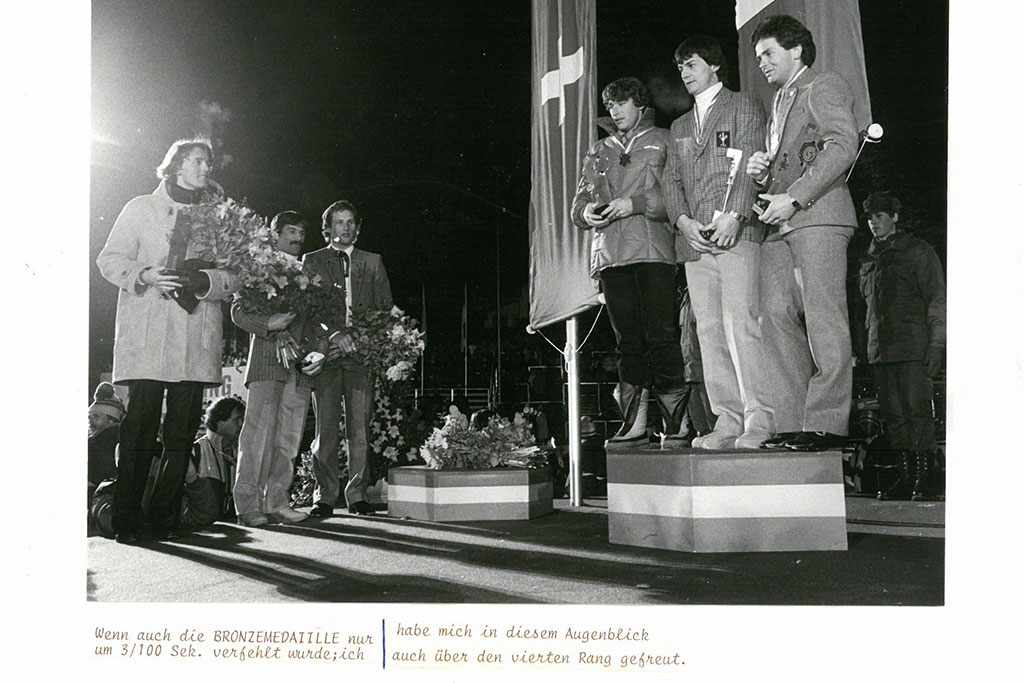 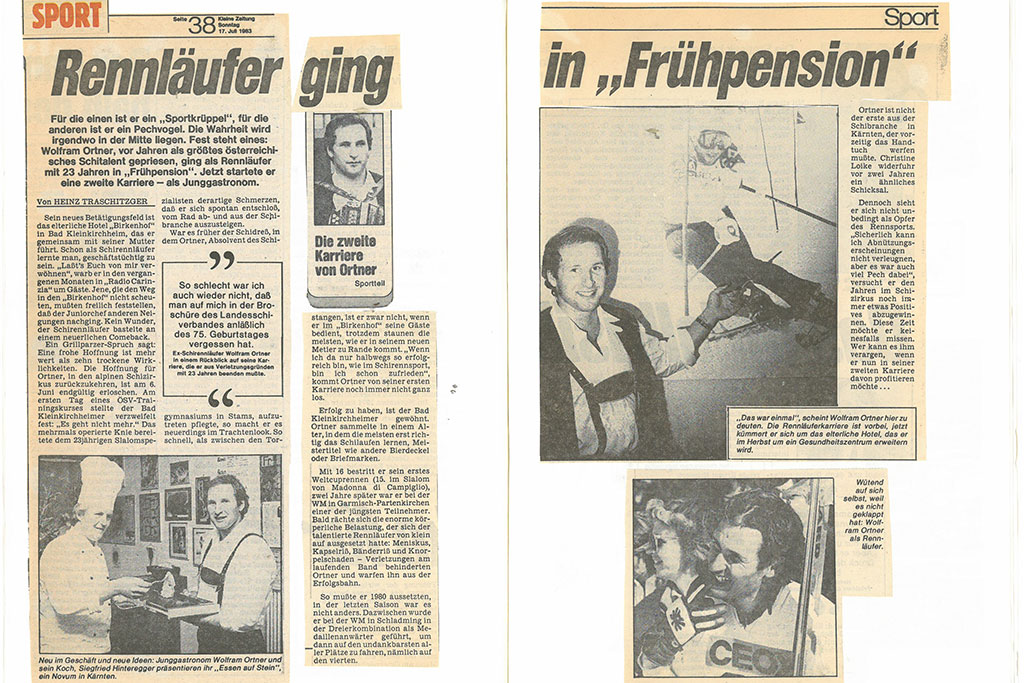 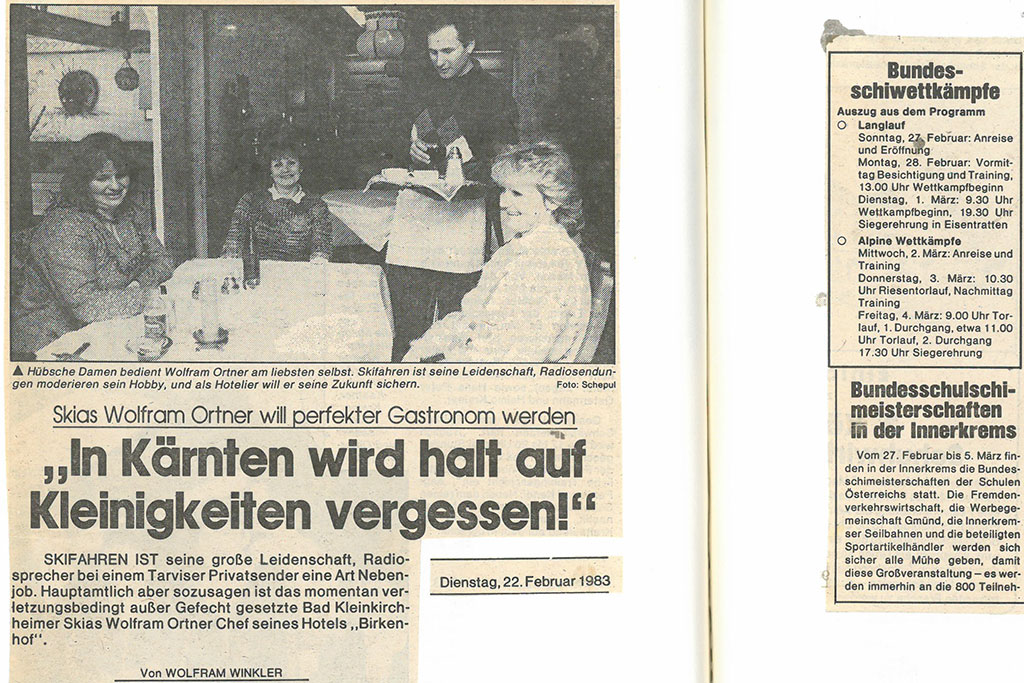 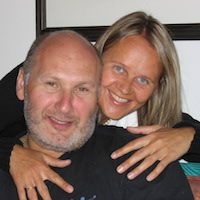 The Art of Living & Enjoyment 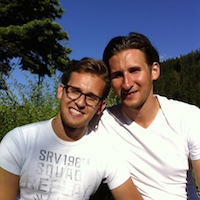 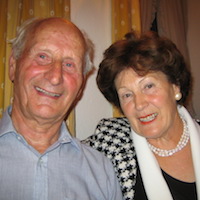 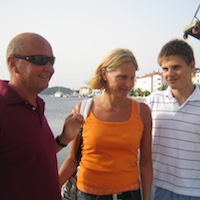 You can reach us at the following websites

load more hold SHIFT key to load all load all